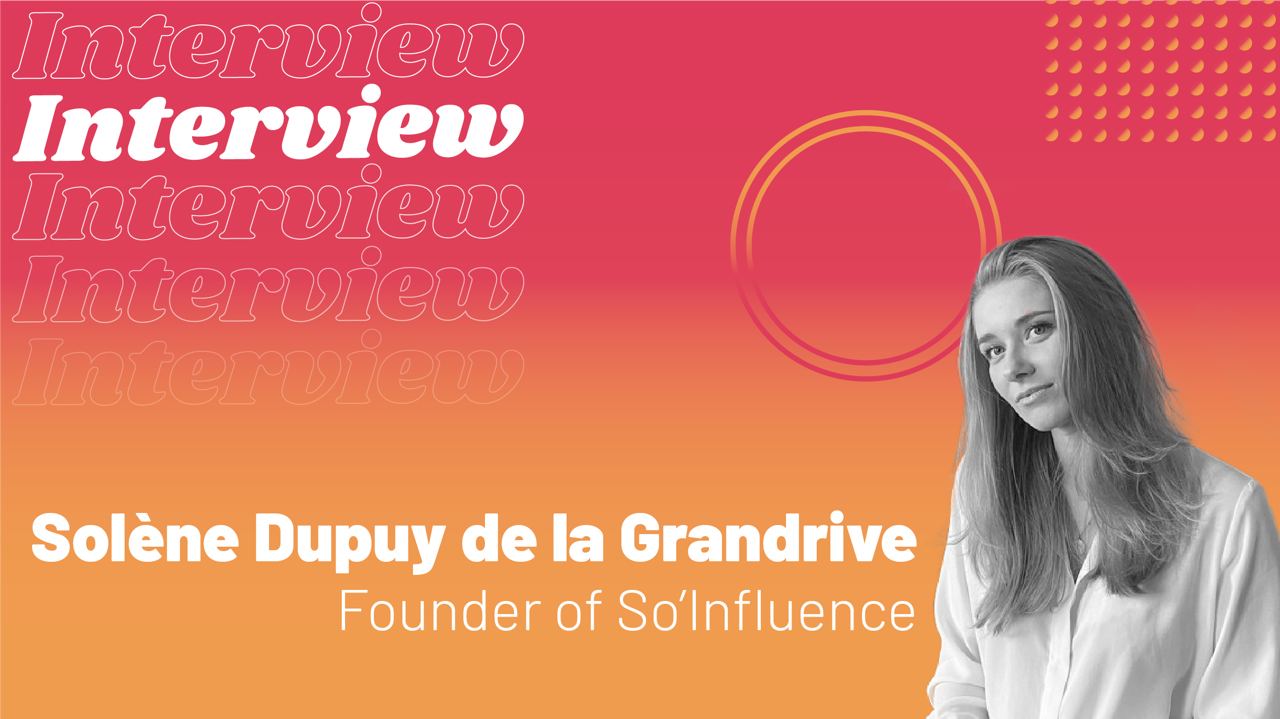 Introduce yourself in a few words, your career path, and in the influence sector?

I am Solène Dupuy de la Grandrive, I am 27 years old and after several experiences in agencies, PR, and influence marketing, I decided to launch myself into the world of entrepreneurship. So in 2019, I founded So'influence, an agency that specialized in ethical and responsible influencer marketing.

What made you want to found So'influence?

So'influence was the outcome of my desire to develop a company with a vision that gives meaning and humanity back into the strategies placed during influencer campaigns and to advocate those values that are dear to me, namely transparency.

Can you describe your job and what does it involve?

Influencer marketing consists of highlighting a brand's products/services through influencers and content creators. By using influencers present on social networks, brands can communicate differently about their products or services. Through So'influence, I only focus on brands and influencers, who have ethical values and who advocate an environmentally friendly way of consumption, while wishing to take care of themselves.

The agency is committed to forging lasting relationships with all content creators, understanding their ways of communicating, their values, and commitments. Influencer marketing is above all based on human relationships, which So'influence wants to put back at the heart of any strategy.

How do you see the future of the influence market?

Influencer marketing has evolved, real professions have developed around this branch, with agents/agencies managing the partnerships of influencers, known as "talent managers", and influencer project managers. Jobs that didn't exist before.

The year 2020 has demonstrated the importance of social networks to maintain a close relationship with its customers and communicate directly with its target audience daily. Influencers have played a very important role in the last 12 months. They have conveyed the brands' messages, the government's health initiatives and animated our daily lives with various challenges.

There has been a real return to basics with the desire for more transparency in the campaigns, and trust. Influencers are becoming more and more demanding in their choice of collaboration and tend to favor brands that are meaningful and in line with their convictions and the expectations of their community.

Both influencers and brands are looking for a long-term relationship rather than a "one-shot" one, allowing more developed creativity and fully involving the influencer in the evolution and proposals of the brand. We now talk about brand ambassadors, the influencer becomes a true spokesperson for the brand over the long term.

I wouldn't say it’s a big surprise, Instagram. It's an application that offers different formats for taking speeches, ranging from a simple photo to a worked and playful video. Most of the influencers are present on this social network that allows great creativity!

Finally, do you have any advice for anyone who wants to work with influencers?

It is often thought that it is enough to choose 3 influencers and wait for the posts to be made. Making an influencer marketing campaign involves real groundwork. Defining the strategy according to your brand's strong points, calibrating, choosing, negotiating with the right influencers, making sure the campaign is well monitored, and then analyzing it, calling on an agency allows you to save a considerable amount of time and above all to call on an expert with an already well-built network of influencers.